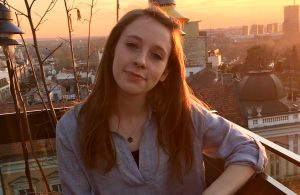 Her research interests include memory politics, social identity, nationalism, civil war, ethnic sectarianism, forced migration, migrant identities, conflict resolution and peacebuilding. Her prior research focuses on historical representation in post-conflict societies, with a focus on the perpetuation of ethnic sectarianism through national narratives in Northern Ireland and Cyprus. It also includes an investigation of the development of group identity, notably through a study on postmemory and the development of refugee identities in postgenerations of displaced Greek Cypriots and Palestinians.

As part of the MOVES project, Laura will investigate the relationship between Europe and Islam since the Early Modern period through the lens of British literature, establishing and tracing patterns of myth-making that have contributed to the strained relationship between Islam and Europe over time. Overall, the project aims to serve as a resource contributing to contemporary debates about European identity, Europe’s relationship with Islam and the integration of Muslim migrants from Asia, Africa and the Middle East into European society.