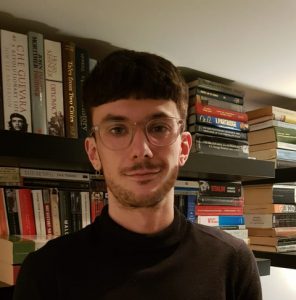 Ryan was born and raised in London, England. He received his B.A. in History from the University of Liverpool in 2015, and his M.A. from the University of Amsterdam in 2018. He is primarily interested in British colonial and postcolonial history and the socio-cultural ramifications of British imperialism. Prior to MOVES, Ryan worked as a freelance writer and journalist.

Ryan’s doctoral research investigates the emotional histories of different groups of migrants within postwar Britain. Specifically, it will address how sadness and homesickness were interpreted and expressed amongst Irish, Indian and West Indian migrants between 1945-1970, searching for overarching, culturally-specific emotional patterns and asking how the dominant culture’s own emotional structure modified these perceptions and articulations.

To achieve this, Ryan will be working heavily with text-based migrant-produced primary sources, such as letter correspondences, journal entries and works of literature. The aim is to shed light on the neglected emotional dimension of the migratory experience from the perspective of the migrant, highlight the complex dynamics of cultural interaction inherently involved in migration, and positively contribute to contemporary debates on intercultural communication and integration.